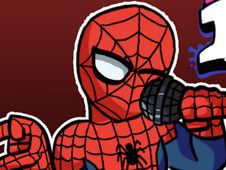 What is FNF vs Spider-Man?

FNF vs Spider-Man is THE FNF mod you needed to have on our website right now, considering that this is the world's biggest and most popular superheroes, with whom it is always tons of fun to play, and you've never had rhythm battles against him before, and now you do it on quite a few awesome songs, such as:

You can choose to duel this character in either the story mode or free play mode, that choice is yours, and to win you have to do the same thing in both cases, which is reaching the end of the songs by playing all their notes according to the charts.

To do this, you watch for the moment when arrow symbols float above BF's head, and at the same time you press the identical arrow keys. Be careful not to miss doing that too many times in a row, or you lose.

Good luck to you all, you will need it against this popular Marvel character, and we hope to see you around even more, as usual!