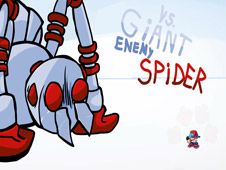 What is FNF Vs Giant Enemy Spider?

Everyone knows already that the world of Friday Night Funkin' Games online probably has the most unique characters in the world, and sometimes the scariest ones, just like it's the case right now with the game known as FNF Vs Giant Enemy Spider, where a giant spider is your next musical enemy, whose song is named after him!

Give your best to defeat the giant evil spider!

Hit the play button to start, and hit all the notes of the song to reach its conclusion, which is when you win. You do so by hitting the arrow keys at the same time as the identical arrow symbols are matching above BF's head.

Be careful not to miss pressing the keys too many times in a row, or you lose, but you also lose if you hit the egg notes, which are traps laid by the spider, so avoid them at any cost. Good luck, enjoy!