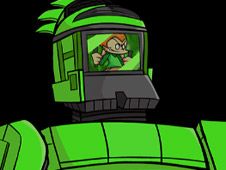 There is still plenty of new and fresh content that our administrative team can offer you for free on our website in the Friday Night Funkin Games category, which is what we will be proving to you right at this moment when we are excited to share with everyone the game called FNF: Pico Giant Robot (Picobot).

This game is a rework of the Tord Remastered mod where instead of Tord controlling a big robot, it is Pico who is the controller, so help Boyfriend defeat the Picobot on the custom songs presented.

The game's mechanics are simple. Press arrow keys on the keyboard at the same time as the arrow symbols that float around BF match with one another, since that is how you play the song according to its notes and charts, and if by the end of the song the progress bar is in your favor, you've won.

Be careful not to miss pressing too many of the keys in a row, because if that happens, you lose the game and have to start again, so don't allow that to happen! Good luck, enjoy, and stick around to see what other games are still coming for you!