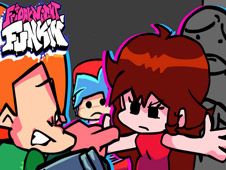 What is FNF: GF VS Pico Angry Mod?

GF is really angry at Pico in this new FNF mod, which is why the two of them are now having a hallway rhythm battle against one another on the song called 'No Pico No', where we are sure that you and GF together will be able to stand up to him!

GF VS Pico, an Angry FNF Mod to play!

As the song progresses, watch for when arrow symbols float and match above GF's head, and at that moment make sure to press the identical arrow keys to hit your notes, something you have to do until the song concludes and the progress bar is tilted towards you to win.

If you miss hitting these notes too many times in a row, you end up losing and having to start again from scratch, so focus not to let it happen, but win instead and have plenty of fun!