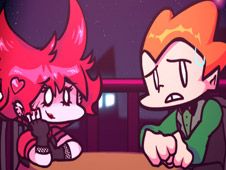 What is FNF: Pico x Cassandra The Date?

An unusual pairing has just appeared in the world of Friday Night Funkin' Games, but definitely, a welcomed one, as right at this moment we invite you all to try out the new and awesome mod known as FNF: Pico x Cassandra The Date, where the two of them will cover three awesome songs together, to show how big the love is between them:

Sing a duet between Pico and Cassandra, a duet of love!

No matter if this game is played in the story mode or free play mode, your purpose remains the same, which is reaching the end of the songs by playing all their notes according to the charts, so when you see arrow symbols match above Pico's head, you will have to press the same arrow keys.

If you miss pressing the keys too many times in a row, you will lose the song and have to start it again, so focus in order not to let that happen for anything in the world!