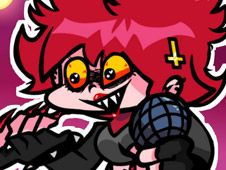 What is FNF vs Cassandra?

For all the many visitors of our website who wanted to keep playing new Friday Night Funkin Games online for free, well, you know we've got you covered all the time, which is the reason why right at this moment we're sharing with everyone here the new and awesome game called FNF vs Cassandra!

Get to know the newest rhythm rival: Cassandra!

Cassandra is a red-haired goth girl who looks and is very crazy, who has some sort of beef with her Girlfriend, so for that reason, she wants to defeat Boyfriend in a battle of rhythm and prove to him that GF is no good for him. Well, you won't allow that to happen, right? Beat Cassandra in this fight, doing it on the songs called Berzerker, Possesion, and Takeover. She comes from Pico's School series, where she is one of the main antagonists!

You are going to use the arrow keys to hit the notes of the songs, pressing the keys when the same arrows match above BF's character, but be careful not to miss too many notes of the song in a row, because if that happens you lose and have to start the match again from start. Good luck!