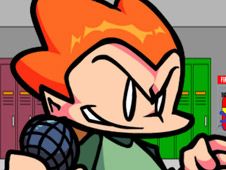 What is FNF: Pico before Week 3?

Did you know that before the events of Week 3 happened, Boyfriend and Pico were already really good friends, and went to the same high school? Well, during that time, the two of them used to meet up and have rhythm battles against one another all the time, just like it is happening at this moment, when we invite you all to have tons of fun playing the game called FNF: Pico before Week 3, which features three new songs to battle Pico on:

Boyfriend VS Pico, the duel of the high school!

As per usual, the battle between the two characters can happen in either the story mode or free play mode, it is totally your choice, and what you have to do is reach the end of the songs and play all their notes along the way. How?

Well, you press the arrow keys at the same time as the arrow symbols above BF's head match one another, but you should be careful not to press the keys wrong too many times in a row, or you lose the whole game. Enjoy!