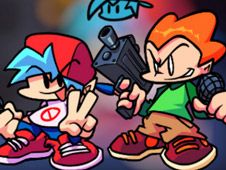 What is FNF Pico X Boyfriend?

We love it when characters from Friday Night Funkin team up with one another, since that is quite the rare sight to see, and this is what is going on today with the mod called FNF Pico X Boyfriend, where the two of them are going up against other antagonists together, and you will do this during Week 3, South, as well as DadBattle, where the vocals are also customized to represent this change. Get ready for fun!

Help Pico and Boyfriend co-operate and win the rhythm battles!

Despite there being two characters you are playing for, the format of the game and the way you play rhythm battles remain the same, but if you're new to the series, reading the following part of the article is important.

You will have arrow symbols float around the characters, and when they match the symbols on top of the screen, press the same arrows yourself, at the exact same moment.

Getting the timing right means playing the songs correctly, and when the progress bar is fully green, you win. Missing to play notes is bad, though, so don't allow that to happen, because too many misses in a row mean losing the game. Good luck!