FNF: Galaxy Collapse But Everyone Sings it

FNF: Everyone Try to Terminate Boyfriend 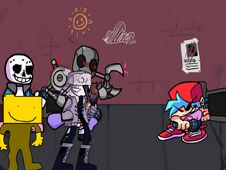 What is FNF: Everyone Try to Terminate Boyfriend?

The Termination song from the FNF QT Mod returns right now, and it goes very well with the fact that Boyfriend will face off against a huge range of characters from the universe, such as Sarv, Void, Cyrix, Impostors, Garcello, Sasha, Steve, Kapi, Hex, and many more, as we would not have enough space to mention all of them.

Help Boyfriend not get terminated by all his musical enemies!

Press play to start, and, then, give it your best to reach the end of the song by playing all of its notes when your turn comes, only at the right time, because if you play wrong notes or correct ones at wrong times, you lose the game and have to start it again from scratch.

To play notes, you watch for when arrow symbols above BF match one another and press the identical arrow key from the keyboard. It's that simple, so you should begin playing right now, and giving the game your absolute best!