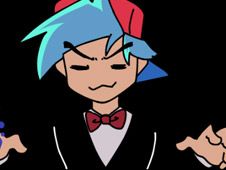 What is FNF RUSH E but BOYFRIEND plays it on Piano?

It's another FNF mod here for Boyfriend to shine with his musical abilities, this time by playing RUSH E on the piano, and with your help, we're positive he will throw an amazing concert!

Sing Rush E in FNF with Boyfriend playing it on the piano!

When you see the floating arrow symbols match on the top right, press the identical arrow keys to hit your notes, and if you can do it until the song concludes, you win, but know that missing multiple notes by omission, pressing the wrong keys, or getting the timing wrong will deplete your health bar, and when it is empty, you lose. Enjoy!