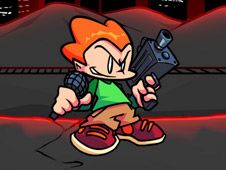 What is FNF: Pico Overload?

Songs from other weeks and mods, but also fresh remixes are all included in the new FNF Pico Overload mod, where he becomes the protagonist, and you need to help him defeat his new foes on the following songs:

It's time for an overload of Pico in FNF!

Whether you are playing in the story mode or free play mode, reaching the end of the songs by playing your notes according to the charts is how you win. So, when you see arrow symbols match above Pico's head, that is when you press the identical arrow keys. Miss doing it too many times in a row and you lose, remember that. Good luck, enjoy!