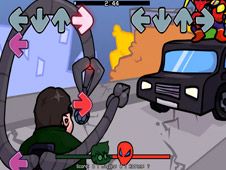 What is FNF: Spider-Man vs Dr. Otto Octavius (Hello Peter)?

A battle between Spider-Man and Dr. Otto Octavius is now going to take place not with superpowers, which both have, but with music, as you have to help Spidey win against this villain with rhythm, on the following songs:

Watch as arrow symbols float and match above Spiderman's head, and that is when you press the identical arrow keys to hit your notes, something you do until you reach the end of the song to win, which is true in both the story mode and free play mode. Don't miss hitting notes multiple times in a row, or you need to start again from scratch. Enjoy!