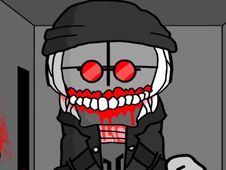 What is Madness Combat 6?

Welcome, all to Madness Combat 6, which is the next installment in the Madness Combat series from our website that we already promised will be coming soon, where once again you can see the crazy adventures of Hank as he is trying to hunt down the evil clown and his many minions. This part of the series is also known as Antipathy.

The story of the animation starts out in Nevada, the home of sin, where you can see a house where Hank invades and then starts killing one minion of Tricky's after another before he finds out that the evil clown is on a train, a train that he will highjack, and where he will do his best to kill even more enemies.

Of course, that is just the start of the story, and we won't give you more details, since we don't want to spoil things, but we're positive you will really enjoy what Hank has to do from the start of the film until the end!