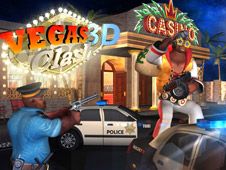 What is Vegas Clash 3D?

The Clash 3D Games series is constantly one of the most popular series of battle royale games online you find and play directly from your browsers, and this is because it has a simple and constant premise, but each new game brings you into new locations and throws in awesome new skins, weapons, and fun stuff for you to enjoy!

It's you against everyone tonight, only in Vegas!

Vegas is going to be the location where you battle, and it's not surprising at all, since it's a place where lots of sketchy figures live and go to, and money is always the source of problems there, with people even shooting one another for it, just like you do in this multiplayer game.

Go around the map with your avatar, using weapons that you find or have in order to shoot down all the enemies you encounter because if you don't take them out first, they will surely come after you. Use the W, A, S, D keys to move around, C to defend yourself, and use the mouse to aim and shoot.

It's the red team versus the blue team, so give it your best to shoot the other team down and remain standing alive until the time of the match runs out on you completely. Let the action and the shooting begin right now!