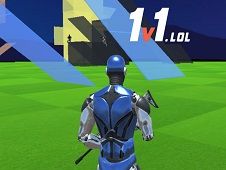 1v1 LOL is a shooter game that is unique because you can also build structures in it! Firstly, you have your weapons, your melee weapon is the pickaxe that can destroy structures very well compared to your other weapons, next you have your assault rifle that shoots in bullets at a constant pace, you've got your shotgun that deals a huge amount of damage at close contact, lastly, you've got your sniper which deals a huge amount of damage from far away too.

The "Free Build" mode gives you the most freedom, you spawn in an empty field and you can build, shoot, and do whatever you want in it. The "1v1" mode is just as the name suggests, it is a 1v1 match against a random player or your friend. The "BR Duos" mode is where multiple team members, spawn on the field and fight each other to death. The "Box 2v2" mode is where you fight against another team with your own team in a box where you can't escape. The party mode allows you to make a party that your friends can join if you want to play together. Some of these modes also have their respective "competitive" versions where you fight in a ranked match.

WASD to move, "F123" for weapons, "ZXCV" for structures. Left-click to shoot, right-click to aim. G to edit structures, Space to jump, Left shift to crouch, and E to interact with doors.