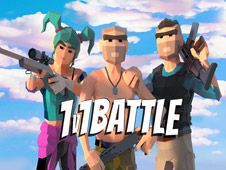 You can now take part in an online 1v1 Battle with Fortnite Games online, all for free, only on our website, and we have put this interesting game in this category since it combines the elements of third-person shooter games with building games just like the original battle royale game does, but in a new world and with fresh skins!

Who will win the multiplayer 1v1 Battle?

You will be thrown in a 3d environment, on a map where you go up against only one other player, and the goal you have is to kill the other player by depleting their health bar completely, which you can do using guns or melee weapons as well. Build structures to defend yourself from their attacks, using the special tools given.

To change between weapons and tools you use the number keys, to use them you use the mouse, and to move around you use WASD, while you press space to jump, shift to run. Winning matches against other players earns you money, and you should use it for new skins, as well as better weapons.

Each opponent will be of your level as well, so try to keep beating them to climb in the rankings and face off against more dangerous foes, until you become one of the best active players. Enjoy!