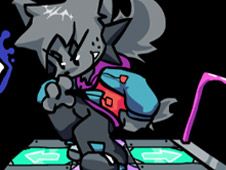 Kapi is a cat boy who is really good at both singing and dancing, and one of the most beloved modded characters from FNF, and we are tremendously excited that he has now come back on our website, as he is the new antagonist in the game called FNF: Kapi (Kapisun + Cat On The Mic), where the two songs mentioned in the title are the two new original fan-made custom songs that you will try to defeat him on!

Boyfriend VS Kapi: The Rematch!

When you see that above Boyfriend the arrow symbols are being matched with the arrow symbols floating around, that is the moment when you have to press the same kind of arrow on your keyboard, so that you play the notes of the songs according to their charts.

You win the musical battle if you reach the end of the songs and the progress bar is in your favor, but you lose if you've missed playing too many notes of the songs consecutively, so be careful.

Good luck, enjoy, and make sure to stick around for all the fun still to come here!

Noob: In Search of Herobrin
ADVERTISMENT