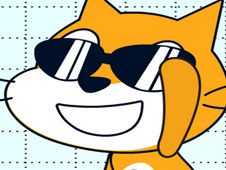 What is FNF vs Scratch Cat?

Cats are some of the most beloved pets on all the internet, so of course, they would also find their way into the FNF Games category of our website, where right now you have the chance to help BF battle against Scratch Cat, an orange cat that is good at scratching, and, apparently, also at music, so defeat it in this game on all of its custom songs:

Are cats better at music than people? Let's prove that wrong!

To win the rhythm battles, in both the story mode and free play mode, your goal is reaching the end of the songs by playing all their notes at the correct times in the charts, something for which you use the arrow keys.

How? Well, you press them at the same time as the same symbols match above BF's head, and try very much not to miss doing it too many times in a row since that leads to you losing the game and having to start it again from scratch. Enjoy!