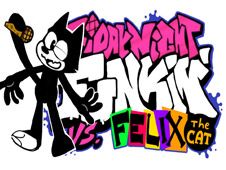 What is FNF vs Felix The Cat?

Felix the Cat from FNF thinks it can beat Boyfriend in a rhythm battle, but the cat does not know that you are here to help the blue-haired protagonist win all the battles he takes part in no matter the antagonist, so come do that once more right now, when you play this game that features the following tracks:

Let's defeat FNF's Felix the Cat back into the silent film era!

As the song progresses, when you see arrow symbols floating and matching above BF's head, press the identical arrow keys from your keyboard, and keep on doing it until the conclusion of the song to win. That is how you keep hitting notes, but know that missing to do that multiple times in a row leads to you losing and having to start again from scratch. Enjoy!