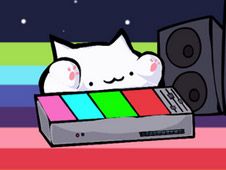 What is Friday Night Funkin vs Bongo Cat?

It goes without saying, as it is quite obvious already from the game's image, but Bongo Cat is going to be one of the cutest musical antagonists you have ever faced off against in the category of FNF Games online, and we are very excited for this mod, just like we hope you are as well, so we invite you to defeat this new character on all its custom songs: bongeao.

Well, to hit the notes in this kind of reaction time game, watch for when arrow symbols above BF's head match with one another, and, when they do, make sure to press the same arrow keys at the same time, something you have to keep doing until the end of the song in order to win.

Be careful not to miss pressing the keys too many times in a row, since that will lead to you losing the game and having to start it all over again from scratch. Good luck, enjoy, and we hope to see more of you, as always!