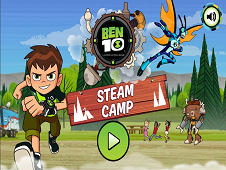 Ben 10 Steam Camp is definitely one of the greatest and coolest Ben 10 adventure game so let's get to the work right now, as soon as it is possible, in order to join Ben in his latest adventure in the Steam Camp. A lot of monsters, robots and drones from another planet has found this camp and they've kidnapped a lot of people, innocent and poor ones and they really need your help in order to rescue them as soon as it is possible. Use the arrow keys in order to use this flying alien which Omnitrix puts available for Ben 10 and dodge successfully all the enemies and opponents which could mean danger for you and for your guys. Collect them and them them with you in the air from the dangerous zone to the safe zone and watch out in order to do not get shooted and killed even while you are turning back so you do not have to let the bullets or missiles touch neiter you nor the guys you will save. Destroy the missiles and the big robots using the SPACE bar in order to shoot yourself to them and collect from them the lives or money or even additional power. Good luck and prove that you are the greatest in this special and so cool adventure so be the best right now!