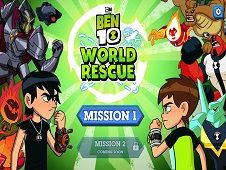 What is Ben 10 World Rescue?

Ben 10: Worlds Rescue is yet another fun game where Cartoon Network’s Ben Ten needs to save the world from danger, something you will be helping him out with, as he will use his Omnitrix and aliens to defeat Kevin, who also has an Omnitrix, and who plans on using his aliens for evil. We can’t let that happen, can we?

Kevin has taken Grandpa Max and Gwen hostage, so only you and Ben can save them. With Four-Arms you are going to play In Paris, XLR-8 for Rio de Janeiro, you soar the skies with Stinkfly in Tokyo, you go to Yutacan with Slapback, and Cannonbolt is Reserved for London.

The same controls you need to remember for all the missions around the world. You move using the right and left arrow keys, you press the up arrow key to perform jumps, you attack by pressing Z, and if you have enough energy you are going to press the X key for a special attack.

After transforming into the different aliens of each location, you advance forward while avoiding traps like the spikes in the ground, as well as obstacles in your path like cars, for example. All sorts of enemies appear from portals, so make sure to kick their butt.
If they deplete some of your health bars, recharge it by grabbing health packs along the way. The green tubes are for health, but if you run out of energy to perform attacks, grab the blue vials for more of it.

Reach the end of each city’s level without losing the fight against the enemies that appear, and after doing this all over the world, not only will it have been saved, but you will get back Max and Gwen, and the gang can continue their adventures!

Use the ARROW keys and MOUSE to play.