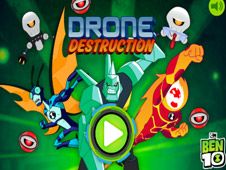 What is Drone Destruction?

You never know what kinds of enemies come in Ben 10's direction, and sometimes they are not even aliens, just like in this game, where his enemies are robots, or, drones, to be more specific, drones that you will have to destroy using the various abilities that reside in Ben 10's Omnitrix, with each of them having a different power, as you already know if you're big fans of the CN show!

Help Ben destroy all the drones to save the day!

Start by choosing the alien you want to be, with your three options being the ones in the game's image:

No matter your choice, to control your alien you use the arrow keys for moving, and the Z and X keys to use attacks, with each of them attacking in a different way, but usually, they shoot things, whether it is diamonds, vines, or fire.

You will face off with multiple waves of drone enemies, with each new wave being more powerful, big, and fast than the one before it, but if you focus and give it your best, you will end up winning, worry not!

Defeat the drone threat, have fun, and make sure to check out even more of our amazing games with Ben 10, because you can bet they will never disappoint!