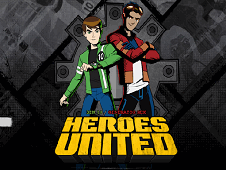 What is Heroes United?

Ben Tennyson from Ben 10 and Ricardo Salazar from Generator Rex are two of the biggest superheroes on Cartoon Network, so the fact that there is now a mash-up game called Heroes United, where the two of them join forces in saving the day make us very happy, and it should make you too, because you get to be these two heroes and help them out, in this awesome new game about which we tell you everything right now!

You can take part in the adventure by yourself and go against the computer, or you can choose the 2 Player mode, where you and a friend both control one of the two characters and work together in achieving your goal. For that one, choose which characters you each want to be, and then you will learn how to control your characters.

After your first battle, the two Cartoon Network protagonists need to work together to defeat evil Evos and aliens they encounter, finding out the mastermind between the combination of the two universes, and save the day from the evil threat. Start your adventure right now, and be a hero once more!

in the game you will find the control keywords.