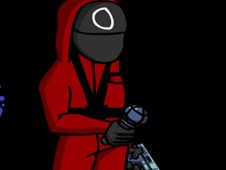 YES, yet another crossover between FNF and Squid Game, the most popular things in video games and TV at the moment has arrived, and we are now very happy to present you with the game known as FNF: Squid Game 1.5, a rhythm battle game that adds upon the first one, which only had one song, with its sequel, Red Light 2.

Boyfriend is in Squid Game, help him get out!

From the main menu you can pick between the story mode and free play mode now, as there are two songs that are playable, but no matter the pick, your goal is the same, and it is to reach the end of the songs by playing all their notes.

When the arrows are matching above BF's head, press the same arrow keys on the keyboard, but know that missing to do it multiple times in a row leads to you losing. Good luck, enjoy!