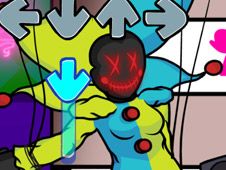 What is Friday Night Funkin’ V.S. The Game Master?

Entity 99 is a jester doll coming from the original game known as The Backroom, and it is the newest antagonist that you and Boyfriend will have to defeat in a rap battle, something we invite you all to do right now with the game called Friday Night Funkin’ V.S. The Game Master, where there will be two songs for you to enjoy doing battle on:

Do your best to defeat the evil jester through rhythm!

This game can be played in either the story mode or free play mode, that is your choice, and you have the goal of reaching the end of the songs by playing all their notes in either of them.

To do this, watch for when arrow symbols above BF match with one another, and press the same keys, but know that missing to do it too many times in a row will lead to you losing the game. Enjoy!