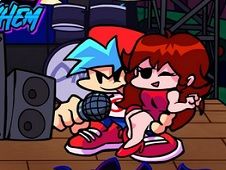 One day Boyfriend thought of going with his Girlfriend to a local festival, where one of the most popular bands was performing. While the lead singer of the band sang, Girlfriend was amazed at how well this boy could play, which is why Boyfriend offered to compete with him on rap rhythms.

In the game, you will meet other new characters, who will have their role well defined. Each character will have to play different instruments: guitar, drums, and soloist at the microphone.

In this mode, you will have two options to choose: story game, or free play, after which you will be able to choose the songs you want to dance, which will be the following: Famous Like, Inverted Ascension, Echoes;

The next thing you will have to set will be the way you want to play, and here we have the following types: