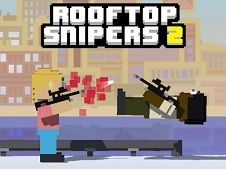 What is Rooftop Snipers 2?

Rooftop Snipers 2 is the second version of the famous Rooftop Snipers game created by New Eich Games where you will have to learn how to handle a sniper as well as try to shoot your opponents.

If you play in 2 players you will have to call a friend to help you play because the game will be one vs the other. After the game has started you will have to keep your balance and try to shoot the other opponent as quickly as possible with as many bullets. In the beginning you will be able to create your strategy by jumping around the opponent and avoiding the bullets drawn by him, after which you will have to improve your style of play, increase your experience and obviously buy more and more weapons. better and better performance that will bring you extra help.

The game starts on the roof of a block, but depending on the level of difficulty you have chosen, you will be able to change the roof that takes place and go together on the roof of a house or anywhere else.
In the game you can choose to play with several characters, and these are from the following interest categories: The mission of the game will be quite simple: you will have to pick up the weapon, shoot the terrorist exactly until you can get him off the roof. The first one to reach 5 points will win the war. In the Customization part you will be able to modify the following settings: map, weapon, condition, falling, ability depending on your preferences: The game is quite difficult because his motorcycle is quite difficult, and the bullets come out of the gun quite hard, and you will have to follow them to see exactly where they are heading. Depending on the score you can unlock new characters and buy weapons, ammunition, immunity, armor or why not change your roof.