Garfield Caught in the Act 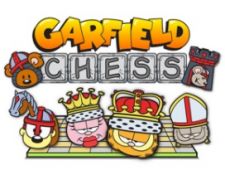 What is Garfield Chess?

Garfield Chess is a new game from the category of the stinking cat in which you will have to learn to play a game of thinking, logic, and skill, more precisely chess. For a start, you'll need to know that all the pieces in the game are part of the cartoons you know about Garfield, be its pawns, the rider, the tower, or whatever, but the game of chess remains the classic you know for sure. The game of chess can be played in two modes, single player or 2 player mode if you want to fight against a colleague, friend, or brother.

After selecting the game mode, you will have to start the chess match which, as we know, will not be easy at all, but you will have to build your strategy to succeed in defeating all the opponent's pawns. Odie, Pooky, Arlene are part of the chess game this time, but they will be in different positions because each of them replaces a classic chess piece. The pawns are replaced by Pooky, the Queen is replaced by Arlene, the king is Garfield himself, and Odie is the rider.

Each team is made up of the same pieces, but the difference is that one team is colored red and the other team is colored blue. At the bottom of each player are illustrated chess pieces, and every time you manage to take a piece from your opponent, it will be counted there.

use the mouse to move the pieces.