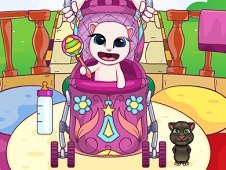 What is Baby Angela in Stroller?

Beby Angela is her mother, Angela Talking with the stroller in park with you because it has always need your help irrespective of Angela Baby's needs. First you have to play the game, then take care of that Angela has wound to the head, it has a small wound that you have to treat it with a plaster. After you put the patch will have to take care of Angela because it will start to cry and you'll have to drink milk from a bottle of milk. Once you have fed her and gave you food, drink milk Angela Cat will have to give him the ball of thread to play with him. After we played'll have to figure toy needs after the balloon with helium to him to the heaven and eventually put them out to blanket her because Angela did cold and cools quickly. After you love with hearts of love, you can go to the next game where you have to play the piano.

use your mouse to care Angela.