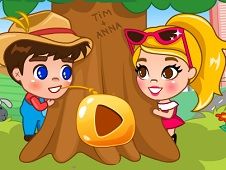 What is Tale of Two Hearts?

Tale of Two Hearts is an adventure game in two players with two lovers Tim and Anna who will have to overcome together the different levels of difficulty of this game.

For a start, you will need to know that you are working with two children who love each other and want to go through all the adventures of this multiplayer game of girls and boys, so it will be best to call in a friend, a sister or even a friend. parent to help you get through the countless difficulty levels of the game faster. As you can see, the adventure begins quite simply, Tim and Anna will have to move together so that they can collect all three engagement rings, diamond gold rings in the middle without which they can not move on to the next. level.

Tim was a simple farmer boy, living his simple happy life and Anna was a girl trying to get away from the agitated city life. The concerns of the world have not reached this quiet little village. One day she decided to take a relaxing ride out of the city, but she got herself in a fortunate incident in that quiet village. When worlds collide, beautiful things happen, our story begins here...

In the game you will have to use different techniques and objects used by real farmers to overcome all obstacles in each level; for example in the second level of the game you will have to pick up a straw bale using the S key and put it down the stairs, using the W key to get to your girlfriend. The game created by CuteZee is a great combination of Fireboy and Watergirl and Bob the Robber games that you can play on Friv-Games.com, but in "Tale of Two Hearts" the graphics are much more detailed and nicer, managing to pique the interest. to children of all ages. As you can see, you will have to put your mind to the contribution, because the game challenges you to different problems of logic, mechanics or thinking that you will have to solve in order to succeed, but primarily in this game in two players are able to gather all three rings that symbolize the love between Tim and Anna.

In total, the game has 21 levels, but to reach the last level you will have to go through all the first levels, and if you reached level 20 you will be able to access level 21 only if you have at least 60 rings. During the game you will have to be more and more attentive to all the obstacles in the game, little by little they will appear including the domestic and wild animals from Tim's farm: the wolf (which represents a danger that you will have to avoid. ), sheep, dogs (who will guard you from wild animals) and many more.