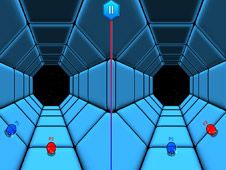 What is Two Tunnel 3D?

Two Tunnel 3D is here to give a boost of new life into the genre of endless tunnel runner games online, always a blast to play, since they have become a classic already, but this one is made even better by the fact that you can compete not just against yourself, but also against another real player, as it is also a 2-player game, as the title might suggest. Two balls, two tunnels, double the fun!

To make it fair, you compete in the same tunnel, but the screen will be split in two in order to make it easier for you to see, and one controls a blue ball, the other one a red ball. Use the arrow keys and the WASD keys to move them.

The tunnel is in space, and you will have holes in it, so make sure not to fall out, because when that happens, you lose and have to start all over again from the start of the run.

As you advance further, not only does the tunnel get more difficult, but also the speed increases, and so should your focus. Good luck to both, and we hope to see you around for even more fun to come!

Use A, D and the Right, Left arrows.