Which Avenger Are You 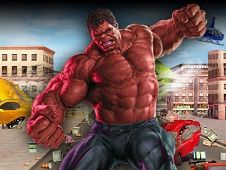 What is Incredible Monster?

We present you Incredible Monster! In this cool 3D fighting game you must save the city from the bad guys by attacking them and defeating them in a fistfight! You are playing as the Incredible Hulk, you can also choose multiple variants of Hulk.

There are several missions that you can complete. Each mission has a set of levels that you need to go through to finish the mission. The number of enemies and their location are shown to you on the map and you have to defeat all of them. Hulk has a special attack that needs time to recharge, this attack will create a shockwave and defeat all enemies in the area of the shockwave. ​

Time to defeat the enemies!

Use WASD to move, X for special attack, and use the mouse to attack and look around.