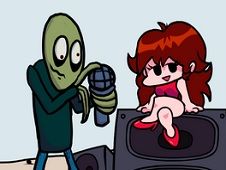 What is Friday Night Funkin’ vs Mr. Salad Fingers?

You can download the official version of the game directly from here.

Friday Night Funkin '- Mr. Salad Fingers is the new FNF mode in which you will have to dance as best you can to win the rhythmic fight against this strange character.

Who is Mr. Salad Fingers?

His first appearance was in 2005 in the well-known series Finger Salads in which he was the main character and plays the role of a character with mental problems, having hallucinations, and disturbing behavior. He is friendly with everyone around him, but because of his problems, he inadvertently creates harm to the characters around him.

He looks like a man, without hair on his head, of medium height, and his skin is green. He has the features of an alien considering the color of his skin and also the fact that he has elongated fingers and oversized eyes. The pants are blue and the sweater he is wearing is dark green. His teeth are yellow because he never brushed his teeth and they have many cavities, which makes him different from all the other characters.

Use the arrows to dance as well as you can!