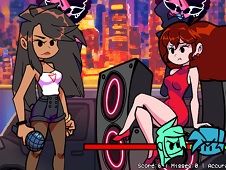 What is Friday Night Funkin vs Ex-GF?

The new FNF - Ex-GF game, will give you the opportunity to meet Boyfriend's ex-girlfriend, who is totally different from the current girlfriend (Girlfriend), but in this way, you will have to help Boyfriend to fight on rap rhythms to this girl. On the edge of the game, GF looks at you and keeps your fists to win.

Who is Ex-GF from Friday Night Funkin '?

Ex-GF is a female character, who has never appeared in any way before, and in this game, she represents Boyfriend's ex-girlfriend.

The girl looks very good, having an enviable figure, long dark hair (brunette), the clothing is short, summer, wearing a white T-shirt with an inscribed triangle, and a pair of black shorts.

The battle seems to be taking place on the roof of a block of flats because behind them you can see the whole city. Even if this mode has only one song called Something Spiteful, you should know that it will not be easy for you to win this battle, especially if you choose to play the HARD version of the game.

Use the arrows to start dancing!