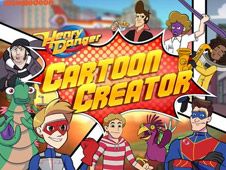 What is Henry Danger Cartoon Creator?

Henry Danger has always been a show associated with the world of comic books, since this is a superhero show, and before teenagers watched these heroes on the screen, they could read about them in fun comic books, so having a game such as Henry Danger Cartoon Creator added on our website right now was a no-brainer!

Let your inner artist out, and create an adventure for Henry Danger!

There are two ways you can play this game, and the first one is the avatar creator, which is actually a character creator mini-game, where you get to make your own comic book character, so turn yourself into something new, and you can also become a superhero, but a civilian is always an option as well.

Of course, then there is the mode we've come here for, the cartoon creator one, where you can arrange panels on the pages, pick backgrounds, place characters in them and have them make certain actions, you can add walls of texts as well as awesome decorations, and we're sure you will be so creative that you will create something very interesting!

Now that you've learned about how awesome and simple this game is, we hope that nothing holds you back from starting it at once, and having fun as only here is possible!