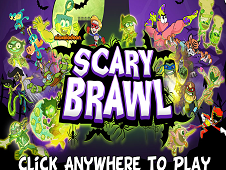 What is Scary Brawl?

Scary Brawl is a great game appeared on our site where you are going to do your best to make sure that you will win the fights to prove that you are an amazing fighter. You are going to use the arrows to move in the ring with your fighter and you need space to attack. If you have enough energy from time to time you can make a special attack that is going to affect a lot the opponent. You can see your life at the top in the left side and in the right side you can see the opponent`s life. At the top in the middle is the timer. If you can not defeat the opponent before the time runs out you will lose just if you have less life than the opponent. You can play a quick match in this new fighting game or you can play the championship if you think you can defeat a lot of opponent one after another. In this exciting game with your heroes from Nickelodeon animated television series like Power Rangers, Spongebob, Ninja Turtles and so on many others you have to be persistent so you do not have to give up if you do not win from the first attempt. You need training to become better at fighting.

use the arrows to move and space to attack