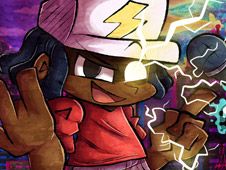 What is Friday Night Funkin VS Fueg0?

Fuego0 is a popular YouTuber who now has his own mod in the Friday Night Funkin Games series, just like many other vloggers have done before him, and we're happy that his game is now available to play on our website, proving once more why here is why you should come to play the best new games on the internet!

Fueg0 is a dark-skinned man who wears white jeans, a red shirt, and over his wavy hair he wars a white cap with a lightning bolt on it, this becoming his signature look, and the way he is depicted in this game. He hasn't battle-rapped in a long time, but he has to do it for Boyfriend, one of the toughest opponents he will ever have, and the three custom songs of this week are called:

Just like in the previous games of the series, you are going to use the arrow keys. When the arrow symbols above BF match one another, press the same ones on your keyboard but be careful not to miss hitting too many keys in a row, since too many notes missed means losing the game and having to start again. Good luck!