Friday Night Funkin In The Galaxy 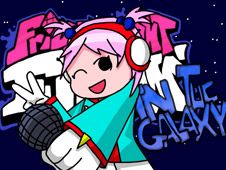 What is Friday Night Funkin In The Galaxy?

We hope that you are ready for a space adventure with your favorite characters from Friday Night Funkin right at this moment when the latest mod that you get to play here and enjoy is called Friday Night Funkin In The Galaxy (Galaxy Mod), where Boyfriend and Girlfriend were on a spaceship when a child who looks like an anime girl with pink hair, pigtails, red headsets, a teal and red top and a white skirt challenged our protagonist to a musical battle. Let's help him win it!

This game brings forward three original songs that you are going to battle this alien child on, and they are called:

For the battle, you are going to use the arrow keys to play the notes of the songs at the right moment. The right moments are when arrow symbols over BF's head match with one another, and make sure not to press the keys one moment sooner or later, since that is a miss, and too many misses in a row mean you lose.

Good luck to you, we hope you win the rhythm game, and that this is far from the final new game you play in this category!