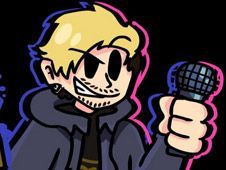 What is Friday Night Funkin vs 8-BitRyan?

8-BitRyan is a popular video games YouTuber who has now made his way into the world of FNF Games, of course, as he is the latest antagonist that you and Boyfriend have to defeat in a musical battle, something that we invite you all to do right now in this mod, where you will have the following custom songs to play with:

Show 8-BitRyan who's the master of rhythm!

You are going to use the arrow keys to play the notes of the songs, so when you see that arrow symbols above BF match one another, you need to press the very same keys and keep doing it until the end of the song to win.

Be careful not to miss pressing the keys too many times in a row, because that means you lose and have to start again from scratch. Choose between the story mode and free play mode, a level of difficulty, and then start funkin' and having fun!