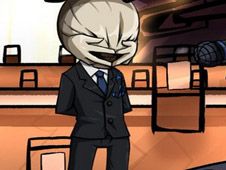 What is Friday Night Funkin’: Library Of Ruin?

Library Of Ruin is a popular anime card-based RPG strategy game, and it seems that Boyfriend has entered this new universe, not something new since he always ends up somewhere new, but, as always, he has to come back, and it will only happen if he defeats all the librarians in music battles on their original songs, which are the following:

Ruin the librarians with your music skills!

From the main menu you will choose between the story mode and free play mode, as well as a level of difficulty, but no matter what you choose, you've got the same goal, which is reaching the end of the songs by playing all their notes following the charts.

This works by watching for when arrow symbols match above BF's head, and at the exact same moment, you will have to press the same arrow keys on the keyboard.

If you do it without missing too much, you will eventually reach the song's conclusion, but if you miss the notes multiple times in a row, you lose, so focus not to let it happen. Enjoy!