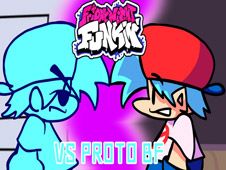 What is Friday Night Funkin’ Vs. Proto BF?

Boyfriend from FNF meets Proto BF, an unfinished version of his character, so, since they are both rappers at their core, they will have to fight one another in a rhythm battle, which is what you will help the protagonist win right now on the following songs:

Whether dueling in the story mode or free play mode, the way to win remains the same, and it is to reach the end of the songs by playing all their notes according to the charts. So, when arrow symbols float and match above your BF, press the identical arrow keys at the same time.

Know that if you miss doing that too many times in a row, you lose and have to start again from scratch. Good luck we wish you all, and we hope to see more of you here, we're always offering you the best content out there!