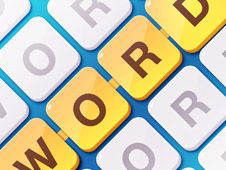 What is Word Duel?

Word Duel has been added here to spice up our category of Word Games with some multiplayer content as well since you will now be put to the test in your abilities to use letters of the alphabet to create words by facing off against players all around the globe, 1v1, where your brain is your only asset, so use it to the max!

In each of the five rounds that it takes to battle the other player, you have 30 seconds to form a word using the letters down below, so use the mouse or finger to place them into the empty brackets, and the player that has formed the longest and best word will win that round.

Win the whole match by winning more rounds than the other player, and as you keep defeating opponents, you will be able to rank higher in the list of worldwide players. It's that simple, so you should start off right now to see how much fun you can have as you challenge yourself in the arena of letters and words!