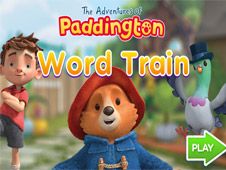 What is Paddington Word Train?

Previous games with Paddington from Nick Jr where you had the chance to create words out of letters had been very well received by all the kids who played them, so, of course, we would not have missed the opportunity of bringing you even more of them, as we are doing right in this instance with the awesome game called Paddington Word Train!

Make a train of words with Paddington!

In this game, together with the bear and his friends, you will create sentences out of words, so you will use the mouse to drag the words that are down in the brackets and arrange them on the carts of the train, and if you put them in the right order, the train leaves the station, you clear the level, and can advance to the next level.

Don't worry, since for each level of the game you have a representative picture that shows you the meaning of the sentences, so you can use them as a guide to arranging the words in the correct order, simple as that. Start now, and have fun as only here would be possible, where we always bring you the best content possible, day after day!