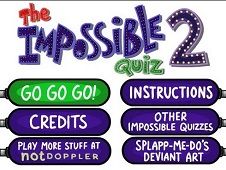 What is The Impossible Quiz 2?

The Impossible Quiz 2 is the second version of the game that drove kids crazy, one of the hardest online games The Impossible Quiz 1. For starters, you should know that the new version of the game is also created by Slapp Me Do's, so the game is of the same quality, with the same silly questions, but highly appreciated by users because it forces them to think "outside of the box", which is a new beginning for online games.

Try the first version of the The Impossible Quiz 1

Back by popular demand...it's the impossible quiz, that can't be good. The rules are simple: Try to complete the quiz by answering all of the "questions". It may sound easy enough, but you'll require quick reflexes, luck mad, mouse skills, and some old insane logic. Oh, and it'll help a bit if you've played the original Impossible Quiz! The majority of questions are multiple-choice, but there's plenty of surprises along the way. The main thing to remember is to THINK OUTSIDE OF THE BOX.

Tick tock, tick tock...BOOM! Your worst nightmare. If you see a bomb in the top right-hand corner (or wherever else they turn up) you know you've got to act fast. If the timer on the bomb reches 0, then it's instant GAME OVER! It's hilarious when this happens on the last question, oh yes. Bomb fuses can range between 15 seconds and 1 second, so be alert! However, you can easily wipe a bomb out if you have the right equipment.

There are 2 types of power-up hidden throughout the quiz. Keep your eyes peeled for anything that looks suspicious, as chance is, it's something good. Skips allow you to skip a question, believe it or not! There 3 to collect. Once collected, simply click the icon at the bottom of the screen to us it. if you ever managed o complete the original Impossible Quiz, you'll know that these powers up were actually pretty useless.. but this time round you can use them whenever you want.

These monsters spend most of their time sleeping, but the moment they smell a bomb smoke they wake up. Remember that these creatures are very lazy, but they can wake up when a more difficult question arises. The moment these creatures open their eyes, in fact, the eye presses on their head, and they will manage to destroy the bomb. In total, you will find three such monsters throughout the game.