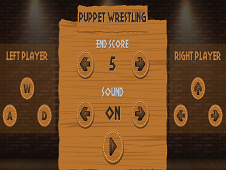 What is Puppet Wrestling?

Puppet Wrestling is such a great and so cool fighting adventure and ability game, which offers to you the occasion to use the arrow keys or A, S, D, W keys in order to prove that you are skilled enough, so challenge a friend to play with you, trying to successfully destroy him in no time. The goal is to make the other puppet jump and bounce there with no chance to win the wrestling match you are going to play against him so use either the arrow keys or the A, S, D, W keys in order to control any puppet and then start throwing it from side to side, as soon as it is possible, until you break his head and make it bounce. Good luck and this is a wrestling challenge so you have to figure out a way to also defend, because defending is so important too! Let's do this right now and do not try this at home, despite being only some puppets! Go for it and pay close attention to your opponent's fighting strategy and focus on avoiding getting knocked down in any way by him, because this may cost you the win of this important battle game, among friends of course. Switch the color of your puppet too!