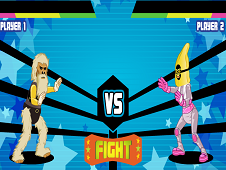 What is Wack Wrestling Challenge?

Wack Wrestling Challenge is a thrilling action game that will test your agility and talent fighter. In this game you can fight against the computer or against a friend because it is a game in 2 players. The goal is to win wrestling matches and score as many points. Although it seems an easy job, do not rush to judge, because you have to face very strong opponents who want as much as you to win the championship. First you must choose the level of difficulty and then create your own like a fighter after. Using the arrows you have to go through the ring and keys i, o, p opponent to attack. Each blow received from the opponent you will fall in life, which is in the left side of the screen. Also every blow to the opponent, it will be placed in the lower right side of the life of the screen. If you lose a match you have to start the whole game from the beginning.