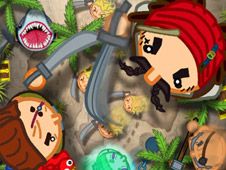 As you probably already realized from the game's title, YoHoHo.io is not only one of the newest multiplayer games on our website in the IO genre you can play directly from browsers, but it is also one of the newest such games with pirates since this game is described as a Pirate Battle Royale, something we are already positive you are greatly going to enjoy, just like the people in our team have had!

Try your best right now to be the last surviving pirate on the island!

You and many other pirates controlled by players from all over the world have ended up on a deserted island, and you are now fighting one another for survival and supremacy because only the last one standing becomes the winner and climbs to the top of the rankings.

What you have to do is move around the island to collect doubloons and get bigger, since this gives you an advantage over smaller players, but which also means that you should avoid players if they are bigger than you.

But, if you can, make sure to kill the other players and get their booty! To move around you use the mouse, and when you want to attack, click when you are next to an opponent, simple as that! Enjoy, and have the best virtual pirate life ever!