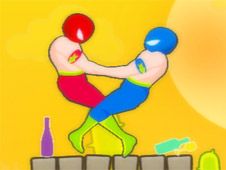 What is Drunken Wrestle?

You can already bet that it is lots of fun to play wrestling games in 2 players on our website, but when the two wrestles that the player's control is also drunk and move in a funny way, you are guaranteed to have even more fun, and that is what our team is about all the time, so we've wasted no time at all and now shared with everyone here the game called Drunken Wrestle!

Wrestle your opponent into the ground, drunken-style!

The two wrestlers, one in a red suit, one in a blue suit will be controlled by using either the W key or the Up arrow key, but if you play in the 1P mode against the computer, you'll use only one of the two keys.

The two players are tied to one another, and you will pull and push one another, wrestling with the goal of making the other one hit his head on the ground first, since that is when you win.

The arenas where you fight can change from one battle to another, so you should take advantage of their shapes, and the first player to achieve five victories becomes the game's winner.

Now that you know how to play this game and how you can give it your best, we hope you start it now and have fun just as much as we did, maybe even more!

Use the Up arrow, W key.