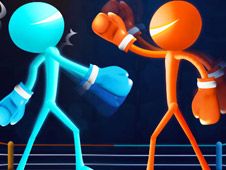 What is Drunken Spin Punch?

Drunken boxing games in 2 players have only become more and more popular over the years that we've been bringing them over, which is why we are very happy that right at this moment we can share with you a brand new one of them, a cool game called Drunken Spin Punch, where a new technique of spinning the punches you throw has been added into the mix!

Throw spinning punches to win against your opponents!

One player uses the W, A, S, D keys, while the other one uses the Arrow keys, both of them using the keys to control their drunken stickmen, one red, one blue, with the moves that you make in order to keep balance and throw spinning punches on your opponent.

If you manage to deplete their health bar first, you win the battle, and the first player to win five matches becomes the winner of the whole duel. Of course, you can play simply against the computer if you don't have a second player around.

We wish both players all the best, and definitely invite you to stick around for more fun to be had!

Use the Arrows and WASD keys.